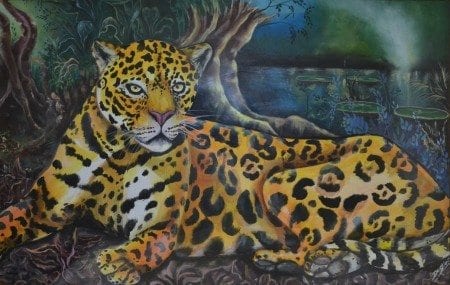 Many have inquired about the Jaguar Brotherhood and how it came in being. The sacred alliance that defines our relationship with the jaguar kingdom is fundamental to our work. Therefore, the back story of how the Jaguar Brotherhood came into existence may be of interest to those contemplating ceremonies at Dawn of Eden®. First, a little background:

It is common knowledge shamans serve as intermediaries between the natural world and the world of spirit. Likewise, it is generally known that shamans often have animal allies in the spiritual realms. However, few realize a hierarchy of power, and authority exists between the various allies, and the jaguar kingdom is positioned at the top of this hierarchy. This distinction affords jaguar spirits access to the highest realms of power, so they might collaborate with celestial deities of a high order.

The Beginnings of a Human/Spirit Collaboration 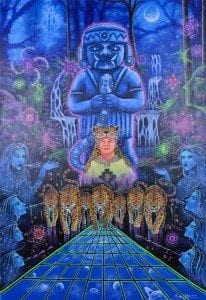 In July of 2010, I was preparing to enter the spiritual realms in ceremony with the great plant-teacher, Ayahuasca. As always, I was looking forward to transitioning into the otherworldly terrain where I work as a shaman.

Given I often encounter the unexpected, I was alert to that possibility during this ceremony. Even so, I was taken by surprise when a jaguar spirit approached, precisely as my consciousness shifted into the Ayahuasca-state, and “merged” with my Being. I tried to manage our combined energy, as best I could, while wondering what exactly might be happening.

Within a few minutes, I was grasping in the dark for my purge bowl to deal with a rather demanding purge. I was informed I needed to clear the energetic remnants of the jaguar spirit that had vacated my body. After regaining my equilibrium, I discovered yet another jaguar spirit waiting to merge with me and the process repeated itself. Before the ceremony was over, I had “hosted” twenty jaguar spirits in the manner described each followed by an obligatory energy-cleansing purge.

When I inquired about what had taken place, I was informed a select group of jaguar spirits had tried me on for size. They had taken turns merging with me to determine which jaguar spirit was best suited to be my personal jaguar.

Reconciling the Outrage of the Jaguar Kingdom 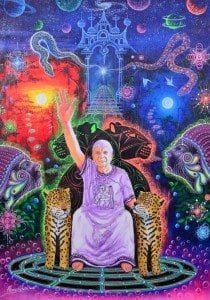 It was a few days following my “hosting” experience, wherein I was assigned a personal jaguar, before I again found myself entering the Ayahuasca-state in ceremony. I had an immediate “knowing” this ceremony had a special purpose. I was to “reconcile the outrage of the jaguar kingdom.” Normally, I might have wondered just what might be my role in such an undertaking. In this instance, I realized the jaguar spirits had conveyed everything about the upcoming ceremony, including the particulars of my role.

The jaguar kingdom plays a special role in service to humanity. They have a divine directive to assist in the transformation of human consciousness. However, within the ancient shamanic arts, there exists a protocol for working with these celestial agents.

Jaguar spirits follow a mandate to work only with shamans who have pure hearts and good intentions. If a shaman is fortunate enough to establish a relationship with the jaguar kingdom, jaguar spirits can be summoned in ceremony. They will enthusiastically give assistance in accordance with their divine directive. However, jaguar spirits conduct their responsibilities with free will and reserve the right to determine who is pure of heart and working with good intentions. In other words, they are free to decide which shamans are worthy of their assistance.

Regrettably, shamans not meeting the jaguar kingdom’s criteria began to ignore the sacred covenants and hijack the powers of these animal allies with enslaving brujeria tactics. Brujo-shamans of this sort operate solely from Ego with greed and/or personal power their only motivation. This disregard of divine protocol ultimately compromised the willingness of the jaguar kingdom to serve humanity within the context of their sanctified bond. The brujeria perpetuated against them was, in effect, causing energetic entanglements. Pent-up frustration ensued.

My ceremony proceeded once the jaguar spirits realized I comprehended what needed to be done (jaguar spirits can read your mind). I was to serve as a conduit for the Jaguars to vent their outrage from the world of spirit into the natural world.

Once I gained this essential insight, a jaguar spirit channeled a “growl of rage” through me into the ceremonial space. Afterward, I prayed for forgiveness from the jaguar kingdom for the abuse and exploitation they have suffered from humankind followed by my expressions of gratitude for their many services. My prayers and expressions of gratitude were followed by a purge, to dispel residual energy from one jaguar spirit to the next.

Like the Jaguars “trying me on for size” in my previous ceremony, the pattern described continued, one jaguar after another, until my “reconciliation” assignment was completed. Finally, I received an all-consuming “embrace” from the jaguar kingdom and their promise to be allied in my work going forward. The Jaguar Brotherhood—a human/spirit collaboration—was born.

Dawn of Eden® is the only fully licensed shamanic center in Iquitos that is a member of the Chamber of Commerce. The Dawn of Eden Church® is the only church in Peru dedicated to the transformation of human consciousness utilizing the sacred plants Ayahuasca and Huachuma as a sacrament.